My name is Katie and I am the owner of Gelato by the Lake.  I have two girls, both born in Germany that have had the luxury of growing up as very special customers and professional gelato taste testers. They asked over and over if we could open a shop here in Coeur d’Alene so they could be a part of the gelato business. Finally, 11 years later here we are, open on main street!

Let me tell you how we got here.

In 2007, I met my husband and moved to Germany. In order to integrate into the culture I took a German language course. The German course was definitely not easy, but I was able to make many new friends including the wife of Italian Gelato Master, Marco Napolitano.

At that time Marco had just started his own gelato business in my German town, and was looking for employees to work in his new gelato shop. He and his wife hired me, they say because of my kind and fun personality, but I believe they felt a bit sorry for me as the transition was difficult and the language was no easy task. I had never worked in a gelato shop, but I learned very quickly to appreciate real gelato. My English definitely helped me in our very touristic little town of Bingen am Rhein, Germany.

Marco, who was born and raised in Italy, started learning the art of making gelato in his parents’ business at the age of 16.

The training in his parents’ business was good, but he decided at the age of 18 to get his master’s certificate, which he successfully completed in 1990 after 3 years. Shortly after his apprenticeship he participated in the first competitions and won the best Vanilla Gelato competition in 1989, the best Hazelnut Gelato in 1991 and the best Chocolate Gelato in 1994. These successes left his father no choice but to hand over full responsibility for the gelato making and production for parents’ business.

Since opening his own gelato shop in 2009, where I worked, he has developed many new flavors and sundaes. In addition, he is a prominent guest for many companies at the most important gelato trade fairs in Europe, such as SIGEP in Rimini, Italy, which attracts about 200,000 visitors a year, or Gelatissimo in Stuttgart, Germany, which attracts about 100,000 visitors, as well as on some TV shows on German television.

In collaboration with one of his customers, for whom he produced gelato, he achieved the world record in 2019 for the largest spaghetti gelato in the world. Almost 600 pounds of vanilla ice cream with strawberry sauce and white chocolate sprinkles.

Even before I moved back to the US in 2018, it was Marco’s and my common dream to bring the Italian gelato culture to North America. Because of Covid-19, his visa was delayed, so I had to make the gelato myself with his help via Facetime, so that we could open our store July 4, 2020. Therefore I’m even happier that he has been by my side since September 2020, helping me to provide not only to the locals, but also to our tourists, a gelato experience that you normally only experience in Europe.

So we invite you to come and enjoy the experience with us. Down town CDA 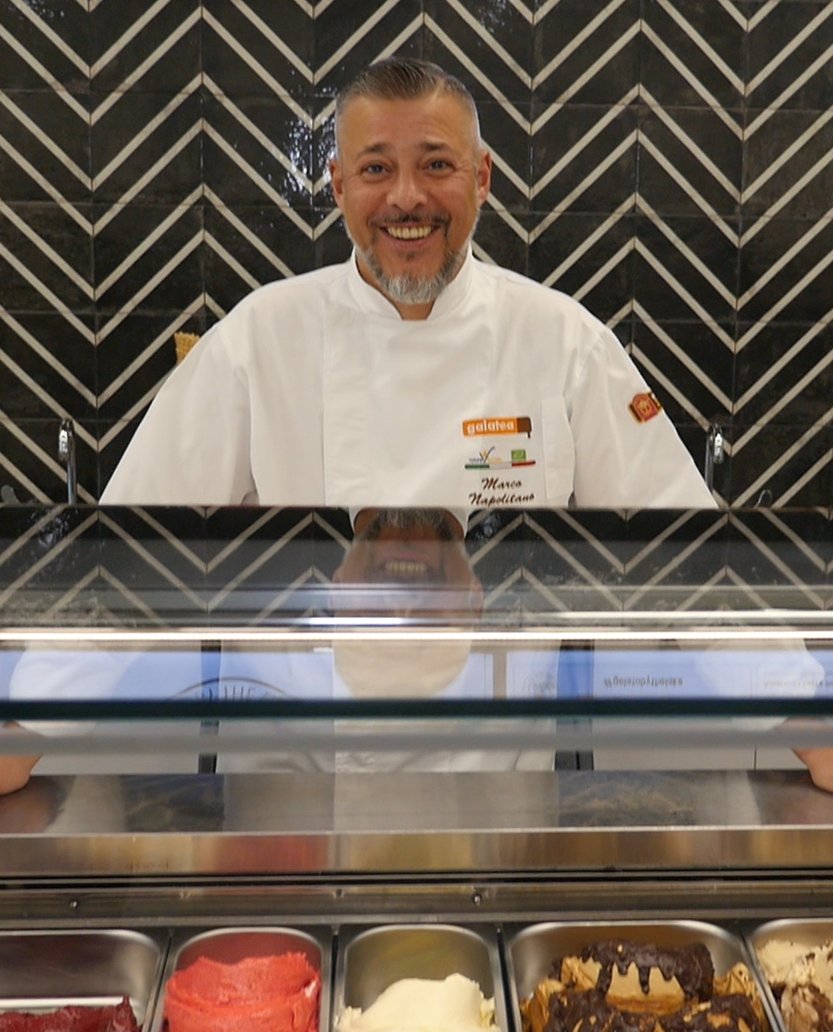